Today was another one interview day, and then some more night exteriors. Since the interview wasn’t scheduled until late afternoon/early evening, I got to go for a run this morning, all the way down to the Thames and then a little along the bank. (Some day, I want to go to the crappy town where I’m not the slowest runner. London is definitely not that town.) It was an absolutely gorgeous day for it, with a cool breeze giving the river’s surface some texture, plenty of sun, and a few fluffy clouds drifting along.

Even better, I got to go on a little extracurricular trip to the BFI bookstore with our lovely director. I managed to escape with only seven books, and four of those totally don’t count because they’re bound screenplays. (No really, they don’t count. It’s a rule. Look it up.)

Our interview of the day was Julian Petley, who is a professor of screen media at Brunel University. Julian’s area is media regulation, particularly censorship, which is a topic important to filmmaking. He had a lot to say about the 2011 abolition of the UK Film Council (its former responsibilities were rolled onto BFI and BFI had its budget cut as a bonus) and other programs dismantled by previous governments. He also spoke at fascinating and worrying length about problems with British journalism and the connection to the proposed censorship of the internet in this country. Another subject we touched on was the problem of distribution, which is something that deeply affects films (and controls if they will ever be seen!) but is often forgotten in the discussion.

And then we all went and had dinner, so we got to speak with him even more. About horror movies, among other things. Julian is the only one of our interviewees who has had much time for extra discussion, and I loved every minute of being able to speak with him. He’s intelligent and ferocious (in a particularly British way).

After bidding goodbye to Julian, we did some more night shooting, this time at Leicester Square and Piccadilly Circus. We waited for it to get a bit late before heading out to the locations so there wasn’t quite the normal crush of people there. It was still crowded, for certain, but if nothing else we only had two random people getting up in the shot and waving. Not bad, I guess. 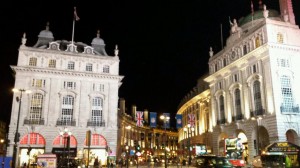 We’re getting down to the wire! Tomorrow is going to be absolutely crazy–we have three interviews scheduled, like we did on our first day of shooting. Going out with a bang, I suppose. I should try to get to bed since we have an early morning, but I’m going to try to watch a bit of The Spirit of ’45 to get ready for tomorrow before I crap out entirely.