Name doesn’t ring any bells? Try thinking about Chariots of Fire or Local Hero or The Killing Fields; he produced these and many more.

This was an amazing interview. To begin with, we met Lord Puttnam at his offices. Not quite in Parliament, but one of the buildings across the street. We had to have all of our belongings scanned, and were photographed for our visitor badges. (Carrie even managed to photobomb mine.) Just the whole security process wound us all up and left us nervous, because it did underline the idea that we were going to meet with someone important.

Lord Puttnam himself is avuncular, eminently accessible, and jolly. He breezed in the door to the room where we’d set up and really put everyone at ease. We chatted a bit about tattoos while I was getting him wired for sound. And he was wearing lilac-colored socks and a very nice pair of black patent leather oxfords.

In a week plus of fascinating interviews, his still stood out. As one might expect, he was incredibly well-spoken and thoughtful–but also extremely hopeful. He has a lot of hope about the state of the art and where things might be going in the future. Though not everything was hopeful; he told us that he was glad he’d gotten out of the industry when he had because more and more, he’d been asked who would be starring in a given movie, when he feels that’s really one of the last questions that needs to be answered. (And here I think now about how movies are often referred to as “vehicles” for particular actors, which makes me wonder if they’re falling down on their job being the vehicles of a darn good story.) When we asked our standard question about what makes British film distinctive, he said it was the internal values. The specific value he named for us was fairness; the British are always very concerned with what is fair, even if they don’t necessary then act on it.

I could really go on and on about his interview. Let me just say you ought to look forward to seeing the finished documentary even more than you were.

After the interview we headed back to home base to stow our equipment and were put in a holding pattern for most of the afternoon. Then I ordered us in some Chinese delivery and there was an unfortunate incident that involved “crispy fried seaweed.” Take my advice. Do not trust this stuff, ever. You might as well drink cooking oil straight out of the bottle.

We were hoping to make it to BFI tonight in time to catch a film or at least hit the book shop, but neither of those things were to be. Instead we sat in the coffee shop inside the building and waited for the rain to please act a little less schizophrenic (random periods of extremely heavy rain, heavy enough to hear it approaching and cause dismayed shouts of “Look out!”) whilst drinking tea. Apparently today was the 50th anniversary of the National Theater, and so we were quite randomly treated to a fireworks display. 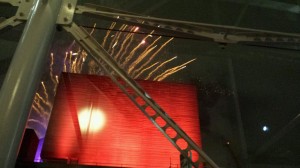 The walk home was thankfully not as rainy as it could have been. I think we might take another shot at the BFI tomorrow, when things will hopefully be open. But I relished the chance to have another night walk through London. I miss this city desperately whenever I leave.